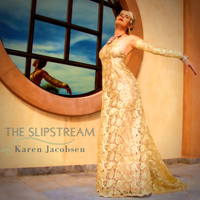 Join us on YT for a LIVE PREMIERE of the Music Video at 10 AM June 4th, AEST which is 8 PM June 3rd, USA East Coast time.

The Music Video - for THE SLIPSTREAM was filmed in the Whitsundays, showcasing the beauty of the region known for the GREAT BARRIER REEF, with a local creative team and support from Whitsunday Regional Council and Arts Queensland. Filming is by Tanya D’Herville Photo & Video, Makeup by Corissa Ivory, Funk It Up, Hair by Yvonne Meenaghan and Kaylissa Crowley, Wardrobe by Katie McCouat of Love & Wore and Jason Chetcuti, Chetcuti Couture, Production Management by Tom Hudak. The Music Video is edited by 3 x Emmy Award winning editor Chris Orwat of Pure Cinematography.

The Song - the title track THE SLIPSTREAM is an expression of searching for answers and meaning. Ultimately uplifting, the surprising and satisfying musical turns capture summiting the emotional mountain of life.

The Producer - Produced by Matt Anthony (Darius Rucker, Shinedown, Pat Monahan of Train) at Engine Sound in New York City, recording began remotely in late 2021, immediately after the release of Karen’s 10th studio album READY FOR WHAT I CAME HERE FOR. With an abundance of material, and a creative focus enabled by the pandemic, the songs were recorded across time zones and distance between Karen's new location half a world away near Australia's Great Barrier Reef, and Matt's studio in the North-East of the United States (9560 miles to be exact).

The Voice - Jacobsen’s speaking voice reached pop culture status when she became the “Australian Karen’ voice of GPS and the original Australian voice of ‘Siri.’

The Upheaval - Her family Recalculated and relocated personally in 2020 leaving New York City for Australia for what they thought would be several weeks while the pandemic 'blew over'. Unexpectedly, they are now based at the edge of the Great Barrier Reef and the 74 tropical islands of the Whitsundays in North Queensland, Australia.

The Destination Ambassador - Karen is the official Whitsundays Destination Ambassador and voice of wildly successful advertising campaigns to entice visitors to the region. The tourism sector has been deeply affected by COVID, and the million dollar Wonders of the Whitsundays campaign garnered over AUD $18 million in bookings. Her journey was profiled in an episode of HOUSE HUNTERS INTERNATIONAL viewed in 200 countries. The Quote - Despite the unexpected turmoil of moving countries, Karen says, “being in the most pristine nature and looking out at the Coral Sea has been a miracle for our family, not to mention endlessly inspirational. The beauty of nature is healing and we feel very fortunate to have been able to choose this option at a time that has been devastating for many.”  When asked about the message behind her music, Jacobsen said “for many of us, these times have been a jolt, and yet an opportunity to take a stark look at our lives and what we want to experience. I personally know dozens of people who have made big decisions about their futures; from where they live to what they spend their time doing. It’s been an era of getting clear about what is truly important.”

The Regional Arts Development Fund is a Queensland Government and Whitsunday Regional Council partnership to support local arts and culture in regional Queensland.