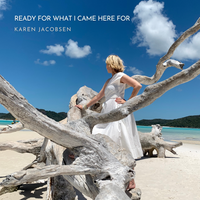 RELEASE of New Record READY FOR WHAT I CAME HERE FOR

At Your Favorite Digital Distributor Online

After an unexpected year in her native Australia, usually New York based international voice-over artist, singer-songwriter and motivational speaker, Karen Jacobsen celebrates the release of her new album READY FOR WHAT I CAME HERE FOR on November 4th, 2021.  Ten cinematic, piano-driven songs with powerful female vocals and inspiring messages; the new album READY FOR WHAT I CAME HERE FOR is the music with a message the world needs right now.  The title track is an expression of her quest to make a difference and find deeper purpose in life. Produced by Matt Anthony (Darius Rucker, Shinedown, Pat Monahan of Train) at Engine Sound in New York City, recording began in September of 2019 before the interruption of the pandemic. After almost a year, video sessions and remote recording enabled the completion of the record between Karen's new location half a world away near Australia's Great Barrier Reef, and Matt's studio in the North-East of the United States (9560 miles to be exact).